This section describes how to use different weighting schemes when working with gridded and regional data. As we use the term, weighting schemes assign a weight to each grid cell or regional observation. They have two major uses: (1) when running regressions, to weight observations to accurately estimate processes, or (2) to perform a weighted aggregation of gridded data to data regions.

Taking the unweighted average of weather within a region can misrepresent what populations, firms, or other phenomena of interest are exposed to. For example, an unweighted annual average temperature for Canada is about -8°C, but most of the population and agricultural activity is in climate zones with mean temperatures over 6°C, and the urban heat island effect can raise temperatures by another 4°C. The time of year matters too, and you should consider a weighting scheme across days within a year, or even hours within a day.

As described in section spatial and temporal scales of economic processes, the scale of a phenomenon matters. Many processes occur at a more local scale than that which data is collected. The motivation for weighting is different for aggregation that represents averaged phenomena vs. phenomena that respond to averaged weather, and the sequence of analysis changes accordingly.

When the phenomenon occurs locally, in response to local weather, we perform weighted aggregations to reflect the amount of the phenomenon in each location. For example, we would use population weighting to model the effects of heat on people. In this case, the order of operations is:

When the phenomenon occurs at a data region level, in response to averaged weather, the weighting scheme reflects the relative importance of weather in different regions to the whole. For example, weighting rainfall by the distance from ashore could be important to predict the declaration of states of emergency. The order of operations is:

In either case, the weighting scheme is the same:

Where to get spatial weighting data¶

Below are some common data sources for various weighting schemes.

Weighting data files come in a wide range of file formats, since any gridded data file can be used as a weighting scheme. The most common data types are CSV, ASC, GeoTIFF, and BIL files. In each case, you (or your code) need to know (1) the format of the data values, (2) the spatial gridding scheme, (3) the projection, and (4) how missing data is handled. These are described in the sections below.

The format of the data values¶

Data values can be written out in text (as with CSV and ASC files) or in a binary representation (GeoTIFF and BIL). If the values are written as text, delimiters will be used to separate them (comma for CSV, spaces for ASC).

The spatial gridding scheme is determined by 6 numbers: a latitude and longitude of an origin point, a horizontal and vertical cell lengths, and a number of rows and columns. - The most common origin point is the location of the lower-left corner of the lower-left grid cell. For example, for a global dataset, that might be 90°S, 180°W, which is represented in x, y coordinates as (-180, -90). Sometimes (particularly with NetCDF files), grid cell center locations will be used instead. - Grid cell sizes are often given as decimal representation of fractions of a degree, such as \(0.0083333333333 = 1 / 120\) of a degree. This is the grid cell size needed globally to ensure a km-scale resolution. Usually the horizontal and vertical grid cell lengths are the same, and reported as a single number. - The number of grid cells is the most common way to describe the spatial coverage of the dataset. A global dataset will have 180 / cellsize rows and 360 / cellsize columns.

Based on this information, you can calculate which grid cell any point on the globe falls into:

For CSV files, you will need to keep track of this data yourself. ASC files have it at the top of the file, BIL files have a corresponding HDR file with the data, and GeoTIFF files have it embedded in the file which you can read with various software tools.

Projections are a way to map points on the globe (in latitude-longitude space) to a point in a flat x, y space. While this is important for visualizing maps, it can just be a nuisance for gridded datasets. The most common “projection” for gridded datasets is an equirectangular projection, and we have been assuming this above. This is variously referred to as 1, ll, WGS 84, and EPSG: 4326 (technically, WGS 84 species how latitude and longitude are defined, and EPSG:4326 specifies a drawing scheme where x = longitude and y = latitude). However, you will sometimes encounter grids in terms of km north and km east of a point, and then you may need to project these back to latitude-longitude and regrid them.

All of these allow missing data to be handled. Typically, a specific numerical representation, like -9999, will be used. This is specified the same way that the gridding scheme is.

Use the raster library. For example:

If you are using R, take a look at the Introduction to Geospatial Raster and Vector Data with R, which has some extensive examples of working with geospatial raster data.

Take a look at https://github.com/jrising/research-common/tree/master/python/geogrid.

In some cases, it is appropriate and possible to use time-varying weighting schemes. For example, if population impacts are being studied, and the scale of the model is individuals, annual estimate of population can be used. This kind of data is often either in NetCDF format (see above), or as a collection of files.

Here we assume that both are regular latitude-longitude grids. See working with gridded weighting data to understand the grid scheme for your weighting file; note that gridded weather data often reports the center of each grid cell, rather than the corner.

To increase the resolution of a grid rr by a factor of N without increasing the sum of grid cells:

To decrease the resolution of a grid rr by a factor of N without decreasing the sum of grid cells:

Cropping - adjusting the extent of data¶

To adjust the spatial extent of grid rr to conform as closely as possible to a box from the longitudinal range WW to EE and the latitudinal range from SS to NN.

The following recipe should work for most cases to align weighting data with a weather grid.

We divide by 4 so that the total population remains the same.

After increasing the resolution of the LandScan data, we clip it again.

Now, the resolution of the dataset has become 1/240th, and we can write aggregate by a factor of \(10\) for it to match the PRISM data:

Now take a moment to visualize the data that you have created. This is a good way to make sure you haven’t made any mistakes and to wow your less climate-adept colleagues in presentations.

To get an initial view of your data, you can just plot your data as a matrix. In R, use the image function; similar functions exist in other languages. The trick is to make sure that you specify the coordinates when you plot the map.

Here’s an easy case, using population data from the Gridded Population of the World dataset. 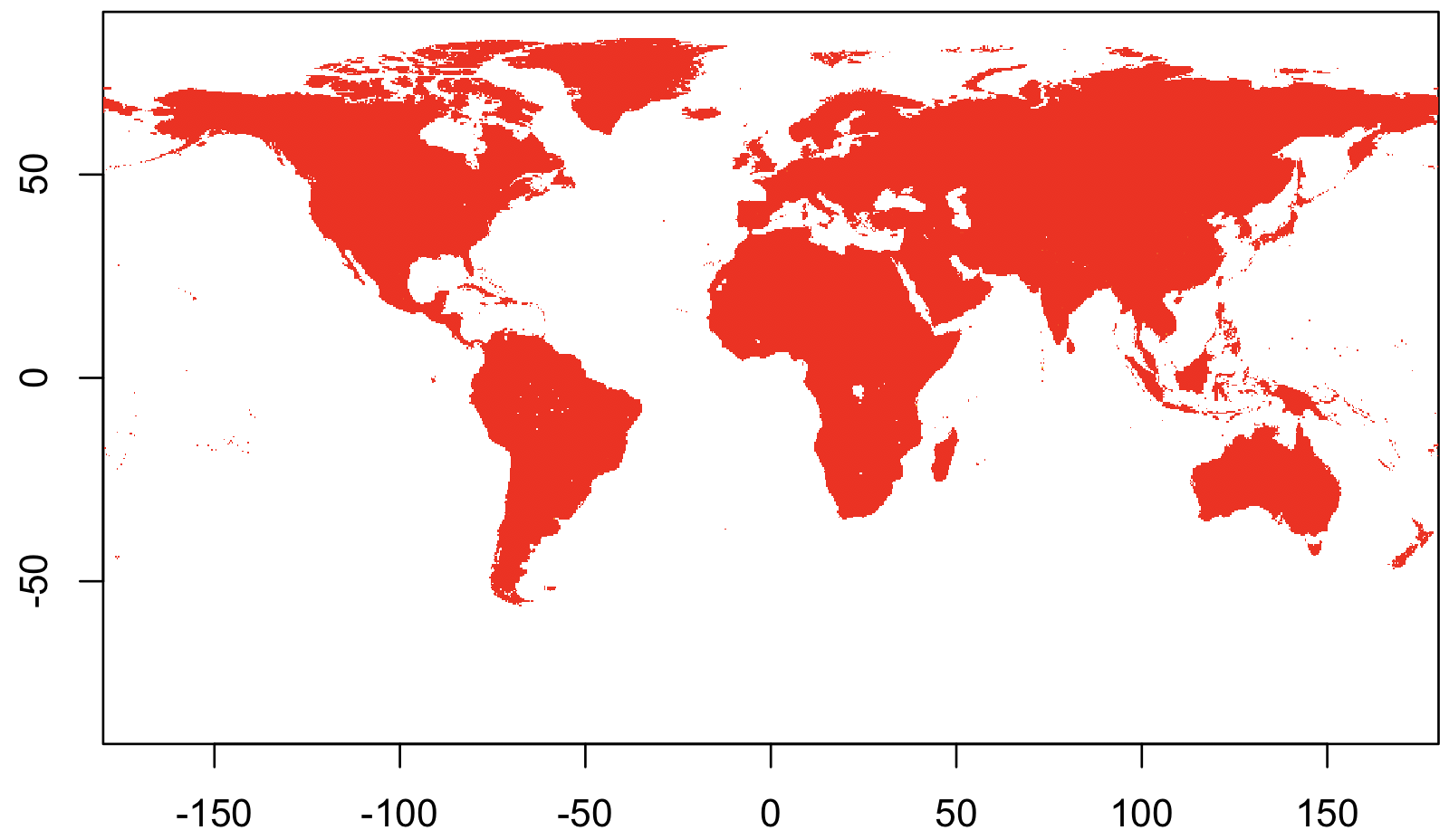 But that wasn’t any fun. Let’s try again with something more complicated.

This is R’s default way of showing matrices, with axes that go from 0 - 1. What’s worse, the map is up-side-down, though it will take some staring to convince yourself ot this. The reason is that NetCDFs usually have the upper-left corner representing the extreme North-West. But R’s image command shows the upper-left corner in the lower-left.

We are also going to plot the countries, so this is easier to interpret. And to do that, we need to rearrange the data so it goes from -180 to 180, rather than 0 to 360 as currently. Here’s our second attempt: 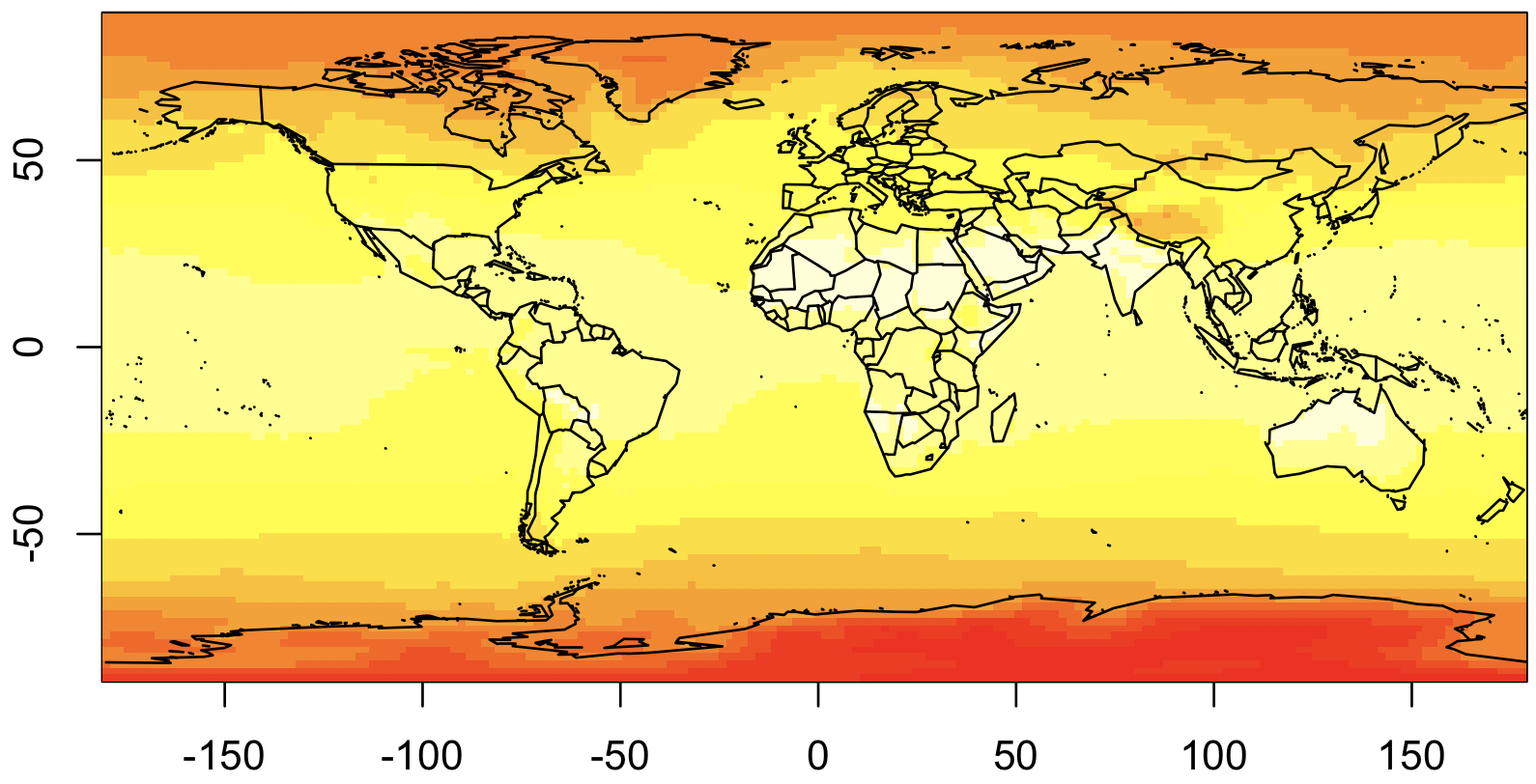 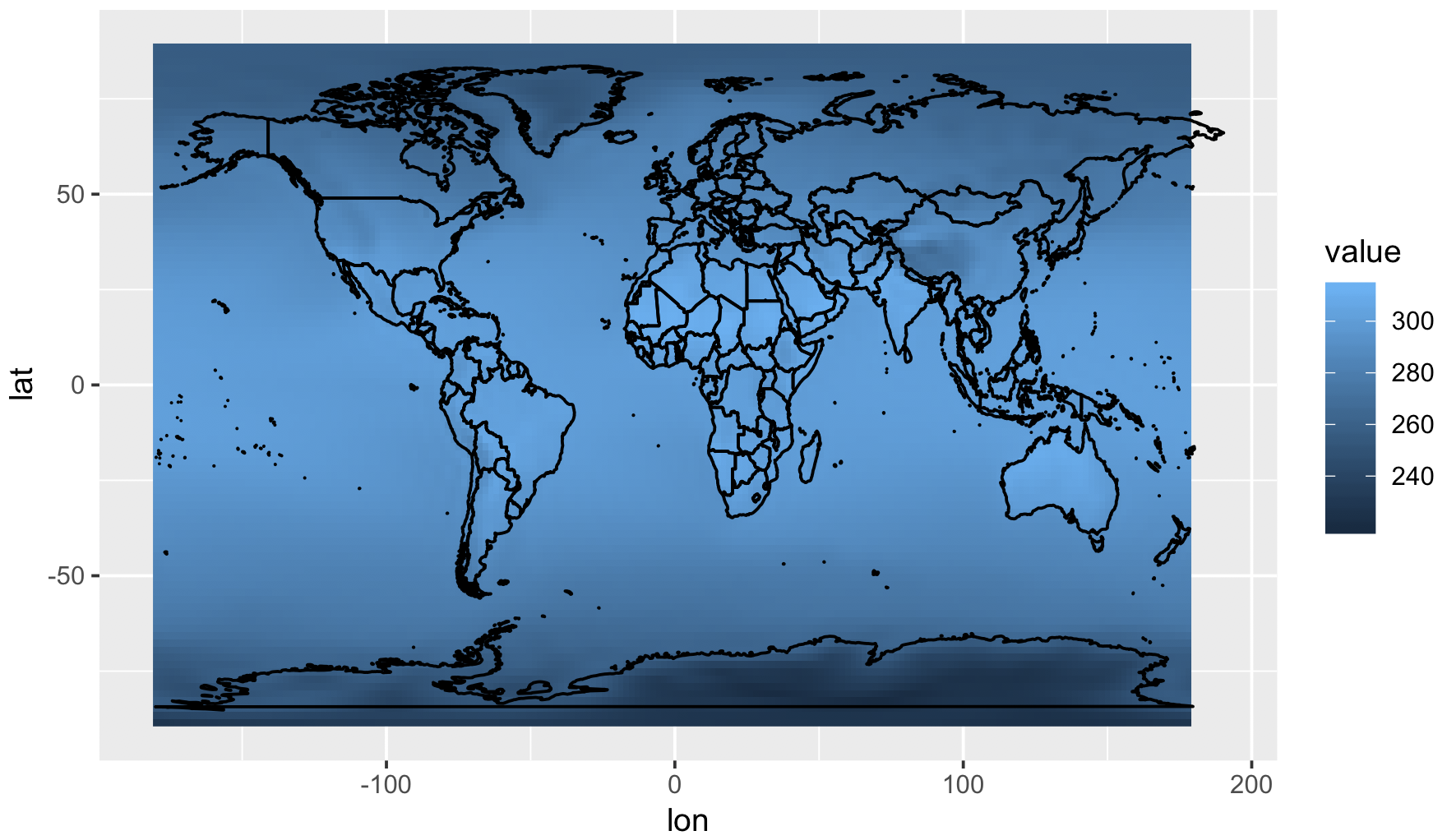 And now we’re ready to production-ready graph! The biggest change will be the addition of a map projection. As mentioned above, map projections translate points on a globe into points on a screen. You’ll want to choose your projection carefully, since people are bound to judge you for it.

Choosing a map projection is beyond the scope of this tutorial, however, you can take a look at this overview from Jochen Albrecht or how Randall Munroe thinks about them.

Using the projection, we can now make the final version of this figure. Note that you will need to use geom_tile rather than geom_raster when plotting grids over projections, and this can be quite a bit slower. We use a color palette from ColorBrewer, which is an excellent resource for choosing colors.