Returning to the “true model” of your process, the decisions around how to generate a linear expression that you can estimate have important implications. Different functional forms serve different purposes and describe different underlying processes. Some of the frequently used functional forms along with a good reference for understanding them in detail are listed below.

Bins offer a very flexible functional form, although the choice of bin edges means that they are not as “non-parametric” as often assumed. It is also highly sensitive to existence of outliers in data. This can particularly be an issue for extrapolation when the results are used for projections: only the estimate for the extreme bins will be used.

The bin widths should generally be even to facilitate easy understanding, although the lowest and highest bins can go to negative and positive infinity (or the appropriate analog). You may want to have smaller size bins around weather values where we expect most of the response to occur and where there is a lot of data, but be prepared to also show evenly-spaced bins.

The interpretation of a binned result is in terms of the time unit used. For example, if daily temperatures are used, then the marginal effect for a given bin is the additional effect of “one more day” for which the temperature falls into that bin.

To calculate bin observations, count up the number of timesteps where the weather predictor falls into each bin:

Another benefit of polynomials for climate change estimates is that they provide smooth extrapolation to higher temperatures. Again, it is important to highlight the fact that the evaluation of the dose-response curve at temperatures outside the bounds of the observed data reflects assumptions, rather than evidence. Cross-validation that leaves out the latest periods or most extreme temperatures can improve confidence in these assumptions.

In calculating the predictor values for a polynomial, consider the scale of the data-generating process. If it is a local process, the high-resolution weather values should be raised to powers before aggregating up to the regions in the economic data. That is, the predictor for the \(k\)-th power of the polynomial is

The dose-response regression would then be applied as follows

while the coefficients can be interpreted as describing a local dose-response relationship:

Restricted cubic splines produce smooth dose-response curves, like polynomials, but mitigate some of the problems that polynomials with many terms have. Whereas polynomials with high-order terms can produce very extreme results under extrapolation, RCS always produces a linear extrapolation. RCS also provides additional degrees of freedom through the placement of knots, and this can be used either to reflect features of the underlying process being modeled or to improve the fit.

In the case where knots are chosen to maximize the fit of the curve, cross-validation is the preferred approach for both selecting the number of knots and their placement. The reference in this subsection title on cubic splines can be helpful in deciding the knot specifications.

As with the polynomial, the dose-response regression would then be applied as follows

while the coefficients can be interpreted as describing a local dose-response relationship:

A linear spline provides a balance between the smoothness of RCS and the direct response curve to temperature correspondence of bins. The segments between knots here are lines. As with RCS, the choice of knot locations is very important.

We generally try to work with many functional forms in a paper because it serves dual purpose of being a sanity check for researchers’ code and a robustness check for readers’ confirmation. However, we need to take decision on the main specification that we want in the paper. To do this, we formally rely on tests such as cross-validation (explained below), but we can also eyeball at the fit of different functional forms by printing overlaid graphs in a way that is suitable for the exercise. An example is shown in the figure below: 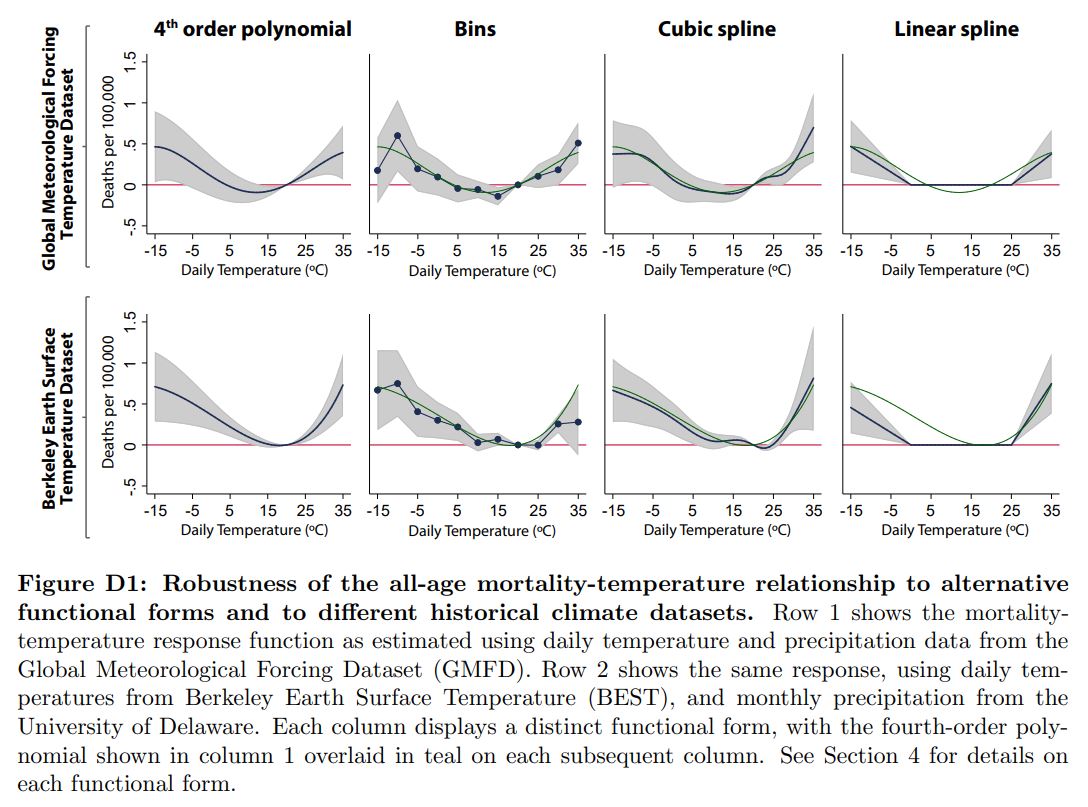 Some examples of the use of cross-validation exercise include deciding on degree of polynomial, cutoff knots’ positions for splines, and selecting weather variables for regression. To do a k-fold cross-validation exercise for deciding on polynomial degree, we run our test specifications (say polynomials of degree 2, 3, 4 and 5) on the data, each time excluding a subset, and evaluate how well the fitted model predicts the excluded data. To fix a metric for making this decision, we can rely on root-mean-square-error (RMSE) statistics. So, the specification with the lowest RMSE will be the most preferred specification here. Having said that, we usually employ a combination of techniques, like eye-balling and RMSE, to make a decision on the most preferred specification.