Following these suggestions will help you organize your research, which could improve reproducibility (replicability) and reusability of your code and results. In computational research, reproducibility is the ability to obtain consistent results using the same input data, code, and methods. Considering these early on is particularly helpful when collaborating with other researchers (including a future self).

Organization of data and code¶

Having a single directory for a project, containing all data and code in subdirectories makes it easier to find things, and also, in case you want to zip everything up and send it to someone else. However, try to keep your code and your data separate. A typical file organization should be:

If you are not sure what predictors you will need for your analysis, create your dataset with a lot of possible predictors and decide later. Often merging together your panel dataset is laborious, and you do not want to do it more times than necessary.

Good naming practices should be applied to files and folders to make clear the contents of your project. Informative naming will help you understand the purpose of each file, and it will improve its findability. Here are a few recommendations:

✅ Use delimiters (such as underscores “_” or dashes “-“) to separate information contained in the file name.

✅ Make sure file names are informative of their contents, and be consistent in using a naming scheme.

✅ If you want to indicate sequence, start your file or folder names with numbers (e.g., 01_clean_data, 02_analyze, 03_results)

✅ Use ASCII encoding if possible, with UTF-8 or UTF-16 as secondary options.

❎ Don’t use extra-long file and folder names, they should be as concise as possible while still being descriptive.

❎ Don’t use proprietary file formats for storing image data. Images, pictures, or figures should be saved as JPEG or GIF files.

Most universities have a data storage product available for their students and affiliates. We recommend you inquire at your university about what can be the best place to store data.

Even if you have organized your working directory perfectly, it is still good to include additional documentation in readme files (readme.txt or README.md). A README file is usually a plain text file stored in a top-level directory. Describe the files and process in these files, and try to keep them up-to-date as things are added or changed. Project documentation will be primarily helpful to you later on (for example, if you need to reuse the code with some modifications), but also to your peers and collaborators in case you share your data and code. Here are a few tips on creating a good README file:

✅ Include a project description, explain how data was obtained and analyzed.

✅ Include a breakdown of naming conventions that will apply to files and variables in the dataset.

✅ Include names and contact information (when appropriate) of dataset creators and maintainers.

❎ Don’t forget to document your code, add information on software versions, and how to run your code.

❎ Don’t use abbreviations, acronyms, or code names without defining them.

❎ Don’t include personal information about authors or maintainers without their consent.

All documentation should be stored in non-proprietary file formats, such as .txt, .md, .xml or .pdf. 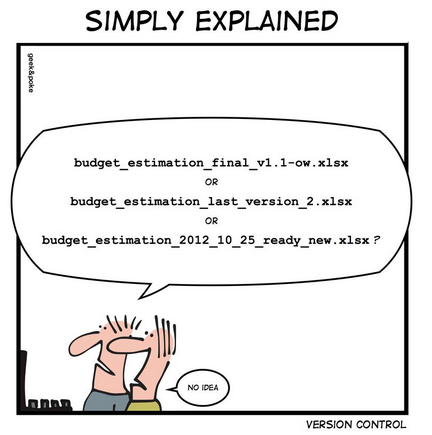 We highly recommend you to go through a tutorial on version control with git.

Automation combines all analysis steps in a cohesive analysis ensemble or a workflow. The goal of automation is to enable a streamlined analysis execution, ideally only with a single command.

An example of a master script in bash showcasing a simple workflow sequence:

The analysis is then executed with a single command in the command prompt (Terminal):

Original data (or source or raw data) should be immutable, meaning that it should never be modified by your code. Instead of making changes to the original data, you should create derived (new) datasets. This is important because the pre-processing performed on source data is as important as the final analysis steps. In addition, it will allow you to reuse the original data multiple times.

A common problem when automating and packaging your project is the use of absolute paths. An absolute or full path points to a location on the filesystem from the root, often containing system-specific sub-directories (for example: /home/username/project/data/input.csv). A relative path, on the other hand, only assumes a local relationship between folders (for example: ../data/input.csv, where “..” refers to the “parent” directory). You should specify relative paths whenever that is possible.

Research data repositories are a primary venue for data dissemination. Use the Registry of Research Data Repositories (re3data.org) to find the right repository for your research data. Alternatively, general-purpose repositories such as Dataverse, Figshare, or Zenodo are a good and freely-available option. However, before sharing or opening your data, make sure that there are no privacy, security, or license constraints.

If you’d like your research data and code to be reusable already in a web browser, consider using one of the reproducibility platforms. For instance, the platform Code Ocean facilitates data and code sharing in languages such as MATLAB, Stata, R, Python, C++, etc. This also means that code based on proprietary software (MATLAB or Stata) can be executed and reused online free of charge. See a demonstration of shared research data and code in Code Ocean originally published in (Deschênes & Greenstone).

When sharing your research data, don’t forget to include licensing information. A standard license should be used. Don’t ask users to “email authors about reuse,” but instead pick a restrictive license.